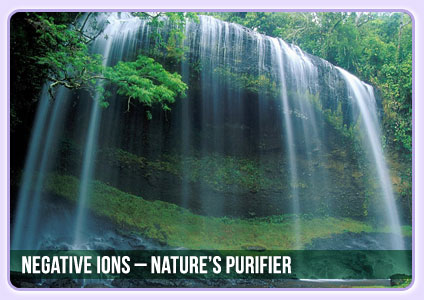 Professional researchers and studies agree that our health is dependent on the amount and quality of Negative Ions in the air. Negative ions are invisible particles that we inhale in abundance near waterfalls, rain forests and oceans (that’s we you feel so alive and envigorated at these places!). Scientifically, they are molecules with an extra electron, helping to alleviate allergies, migraines and sinus problems. Once they reach our blood stream negative Ions have a positive effect on the rate at which Serotonin is oxidized in the bloodstream, resulting in higher alertness, decreased drowsiness, and more mental energy.

The human body consists of billions of cells, and each is enclosed by a cell wall. This cell wall performs many important roles, and one of these is to absorb nutrition and eliminate waste material. When Positive Ions increase, the material exchange is slowed. As a result adult diseases such as hypertension, arteriosclerosis, cerebral apoplexy, and cancer occurs, and our overall health deteriorates. If Negative Ions are provided however, this function is returned to normal. In this way, the Negative Ions vitalize the metabolism of the tissue.

When negative ions are applied to the body, the calcium and sodium circulating in the blood are ionized. This changes the blood pH into an alkaline state and has an overall alkalizing effect on the body. Proper blood pH is essential for optimal health.

According to the clinical research of Dr. Nagamo of Kumamoto Civil Hospital and Dr. Maiyama of Kyoto Hospital in Japan’s Pain Research Institute, the pain relieving efficiency of the Negative Ion has been acknowledged through its notable effect on numerous headache and neuralgia test cases.

Purfication of the blood

Through research done by Dr. Tanaka in Japan, it was discovered that when Negative Ionization is introduced, the Ions in calcium and natrium (salt) in the blood increases, and the blood is purified by increasing blood alkalinity.

When the amount of negative ions in the blood increases, there is an increase in inter-cellular communication. This arises as the cell membranes are opened, cellular metabolism is facilitated, and as a result there is an increase in cellular nutrient uptake and cellular hydration. In addition, cellular waste materials are more efficiently excreted. With the increase in cellular metabolism, optimal cell function is rapidly revived. For more information, research the Nobel Prize in Physiology (1991) for the discovery of the ionic channel.

As the amount of Negative Ions increases, the Gamma Globuline in the blood increases resulting in blood rich in protein and antibodies.

The Control Function of the Autonomic Nervous System

Dr. Tanaka found that Negative Ions control the balance in the Automonic Nervous System between the insulin and adrenal functions. This provides strong resistance to diseases.

Indoor environment, city living, cars, exposure to electronic devices, EMF’s (electro-magnetic fields), and environmental pollution all result in increased positive ions ion one’s body, tilting the ratio of ions towards the positive. This results in a physiological imbalance, which may have detrimental health consequences. Too few negative ions in our body can cause a number of diseases. Some of the health problems associated with an imbalance of ions in the body include: anemia, allergies, shoulder pain, lumbago, rheumatism, neuralgia, headaches, kidney problems, imbalanced autonomic nervous system function, insomnia, and fatigue.

Clinical research at a Tokyo Dental College Hospital sponsored by the Japan Red Cross in Shinjuku found that negative Ions have a positive effect in the control of the nervous system in the relief of tension, and the function of the liver is improved which counteracted many poisons.

Dr. Koudo Michio reported that symptoms of paralysis had been dramatically reduced after supplying negative Ions for 30 days. After 90 days of treatment, the patient had recovered completely. Dr. Koudo Michio said that the negative Ion treatment is very effective for light shoulder sclerosis, as well as, symptoms of paralysis in fingers, arms, and the whole body due to occupational effects experienced by the nervous system.

This direct conduction of negative ions allows for an immediate response and change in the body’s electrical field for 100% of the people. This greatly differs from ambient air ions delivered through the popular negative ion generators used for air cleaning, which NASA reported as only positively effecting 25% of people This negative potential applied to the body ionizes the Calcium and Sodium circulating in the blood (see Nobel paper on the function of single ion channels in cells)”

This changes the blood pH into an alkaline state and has an overall alkalizing effect on the body. Proper blood pH that is between 6.9-7.2 is essential for optimal health. Most individuals run acidic, which is less than 6.9 and therefore compromising their health.

Negative ions applied to the body have been shown to induce a delta wave state within several minutes of usage.

During stages 3 and 4, or slow-wave sleep (delta), growth hormone levels increase, and changes in immune function occur. Restorative theories of sleep describe sleep as a dynamic time of healing and growth for organisms.

This greatly facilitates deep relaxation, reduction of stress, and improved sleep function. Those who have a history of poor sleep or insomnia may find negative ions very helpful. It is especially useful for hypnotherapy and other healing modalities that are strengthened by supporting a deeply relaxed state for clients.